After New Year’s, development resumed in earnest at Easyling. This time around, efforts were mostly focused on bringing already-existing admin features to the general public, by constructing user interfaces, as well as a few completely green-field developments. Thus, the ability to use ETags in crawls was revealed, as well as the power to add non-printing characters on the Workbench, to use path prefix configuration to selectively override cache headers for paths, and to use IPv4/IPv6 addresses for staging servers. Also, users now receive a log with the crawl notification email, useful for tracking down why a given page may not be added, and the Advanced Project Manager power has been tweaked to allow addition/removal of target languages from other users. See the full details after the jump!

Maybe the biggest feature (for you, as a user) is the ability to add non-printing characters to translations in the Workbench. The most important use of this feature is to add a set of special characters in the UTF8 set to denote the directionality of ambiguous text. Without going into too much technical detail, the Right/Left Directional Formatting and Pop Directional Formatting characters allow you to locally change the direction of the text, useful in converting between right-to-left and left-to-right languages. More information on the art of converting between the two formattings can be found in our wiki. 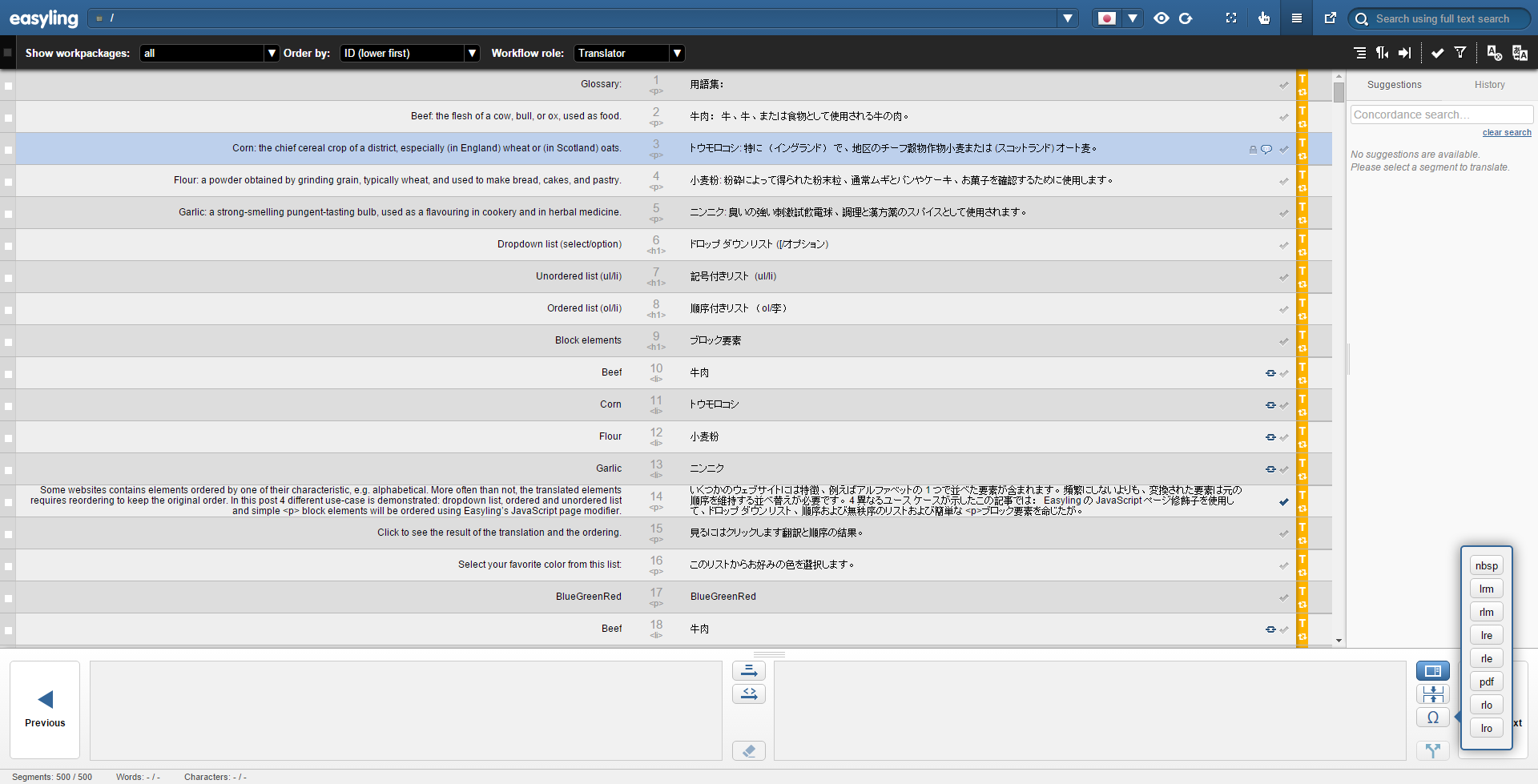 Non-printing characters can have a profound effect on text by communicating metadata to the browser. Take advantage of them through the Workbench!

While the ability to store and use ETags has been present in the Translation Proxy for some time, the user interface has been rolled out in January. The option is selected by default, in the interest of faster re-crawling of sites. It can be disabled just before a crawl is initiated (at the cost of more time being spent on each page and heavier load on the remote server). 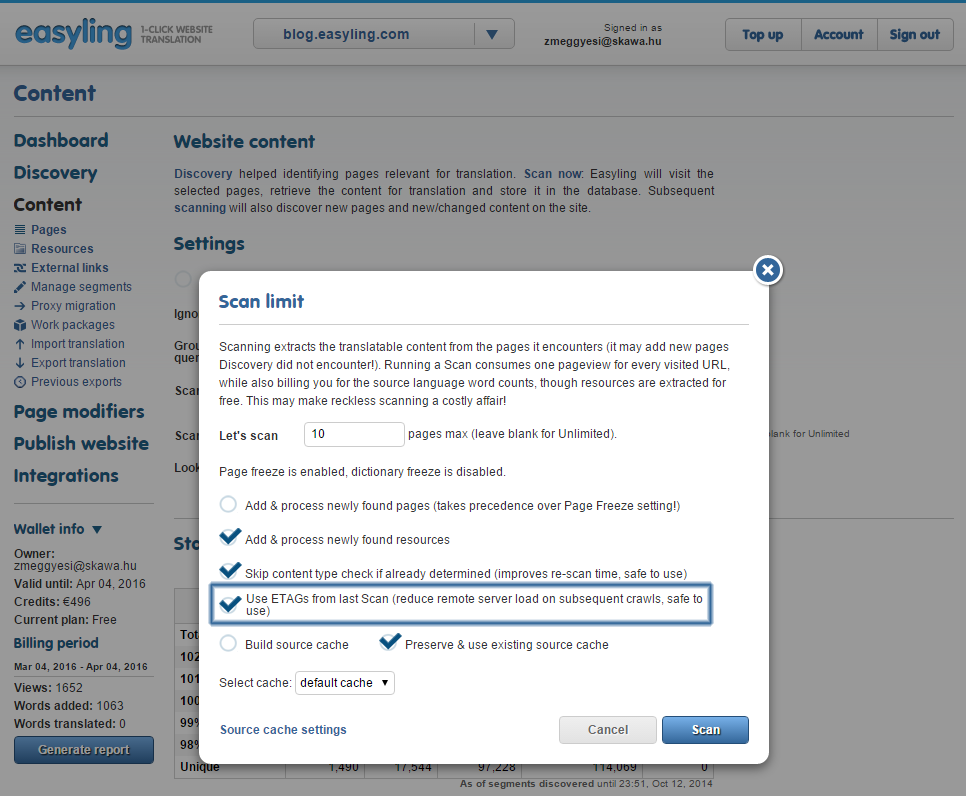 Also added to the UI is the subpath configuration feature: a rather advanced ability to override certain aspects of website serving based on path prefixes. Currently, we allow the overriding of cache headers (Cache-Control and Pragma) to force certain subpaths into a cacheable state. This can be used to interact with browser caches or the Google EdgeCache network, in order to decrease the cost of serving the translated site – by having resources cached on the client’s side, even if the original isn’t, you are spared the cost of that request. 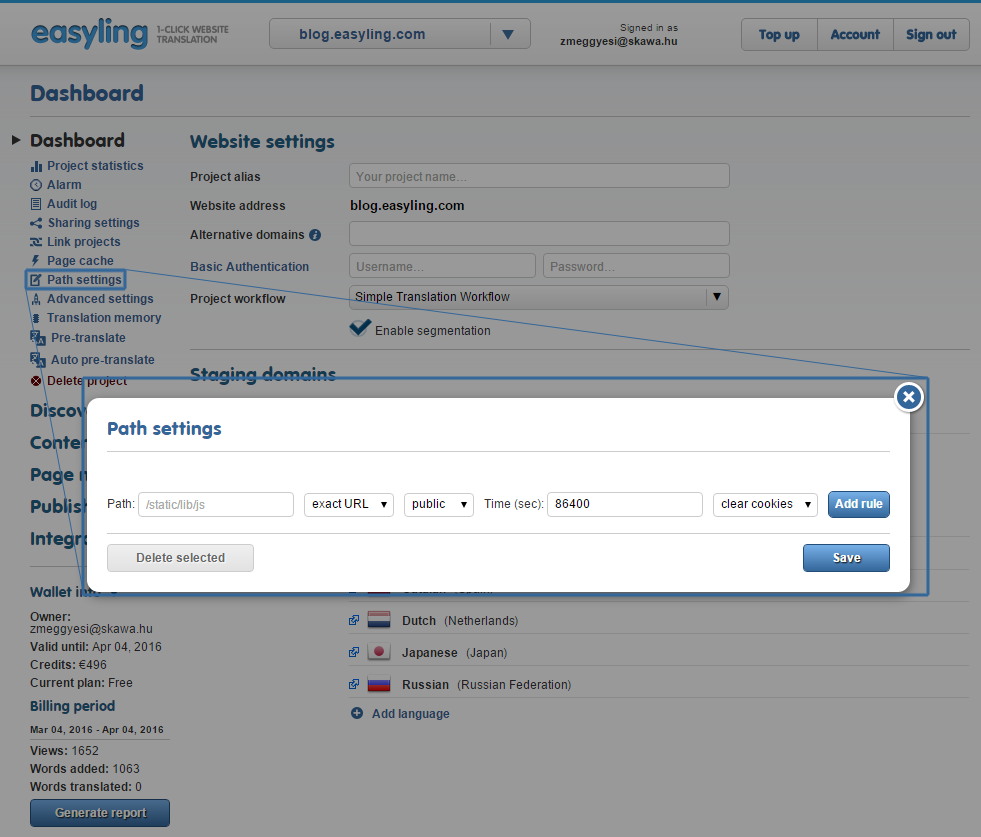 Subpath configuration can be used to alter the behavior of the proxied site significantly by re-writing cache headers and disabling cookies. More configuration options are underway!

Finally, a feature that seems fairly inconsequential in general, but can be a lifesaver in trouble: the crawling log. This file, attached to all the crawl notification emails, lists the requests made during that crawl, and some basic data about the responses returned, as well as basic information about the crawl. While technically inclined users may find interesting insight in it, if you’re running into trouble during a crawl, such as a given page not being added, no matter what you do, including this file in your email to the support channel will prove invaluable for us in tracking down the problem.