May has passed with a lot of rain here in Budapest, and as the proverb goes, “Rains of May are worth gold”. With that in mind, we’re giving Easyling the Olympic Gold in new features. The platform is now able to process JavaScripts embedded into HTML, and some more of the rarely used features of CSS style sheets. Not just that, but we’re also giving users the opportunity to see how their scans terminate, and to upload customized segmentation rules (SRX files)! We’ve also reworked the website publishing interface completely, building on Google’s new initiative of allowing domain mapping without a Google Apps account.

And on a completely different note, we’re now en route to Localization World in Dublin. If any readers are also attending, hopefully, we’ll meet up!

There were a number of technical enhancements to Easyling this month, most important of which is the enhanced ability to parse non-standard HTML, now to a greater degree than ever, without the opening <html> tag. This means that we now accept a wider variety of editor-generated pages, including ones that do not follow the HTML standard to the letter.

A second more technical enhancement is the ability to extract and translate JavaScript code. Last month, we rolled out a feature that allowed our users to translate variables in .js files. This time, we took it a step further, and our newly upgraded sniffer sniffs out JavaScript embedded into the source code of the site in <script> tags, parsing them for translation just like regular text. This allows users to change variable values in JavaScript on the page, although the same caution should be exercised as with the original JavaScript translation, lest the site’s behavior made unpredictable.

Thirdly, still on the topic of JavaScript, the upgraded sniffer also allows the translation of JavaScript function parameters. This means that any data being passed to JS functions can be translated like regular strings.

Finally, our last upgrade to the crawler was the power to alter the @import statements in CSS files. If you have several CSS files governing the appearance of your site, cross-referencing each other, you may run into problems where your site tries to import the original CSS, and fails due to same-origin policies or other restrictions. This can now be avoided by the proxy mapping the URLs in @import statements onto itself, so the import always succeeds.

Apart from the high-tech enhancements, several usability-oriented enhancements were made.
Firstly,  we are now implementing the ability to upload and use custom segmentation rules. Upon project creation, you are given the option to upload your own .srx file, containing the segmentation rules you yourself have formulated, and these will be used to segment your project content into sentences. Do note, however, that this can only be added when the project is created, and is under the Advanced Options menu. 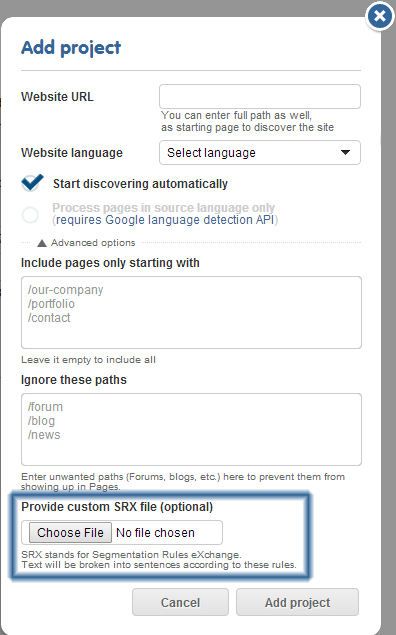 Custom SRX-s can be used to define your own segmentation rules. Be warned, however, that as of now, there is no way to change the uploaded file later on!

Second, we have created an indicator that displays the reasons for terminating a discovery or content extraction scan, if it ends prematurely. If you run out of quota, or if the process reaches your preset limit, you will be given a notification on the UI stating the reason. Also, the notification email you receive will include one more condition, that of “reaching the end” – the entire site has been processed, and there is nowhere left to go (that Easyling can know of). 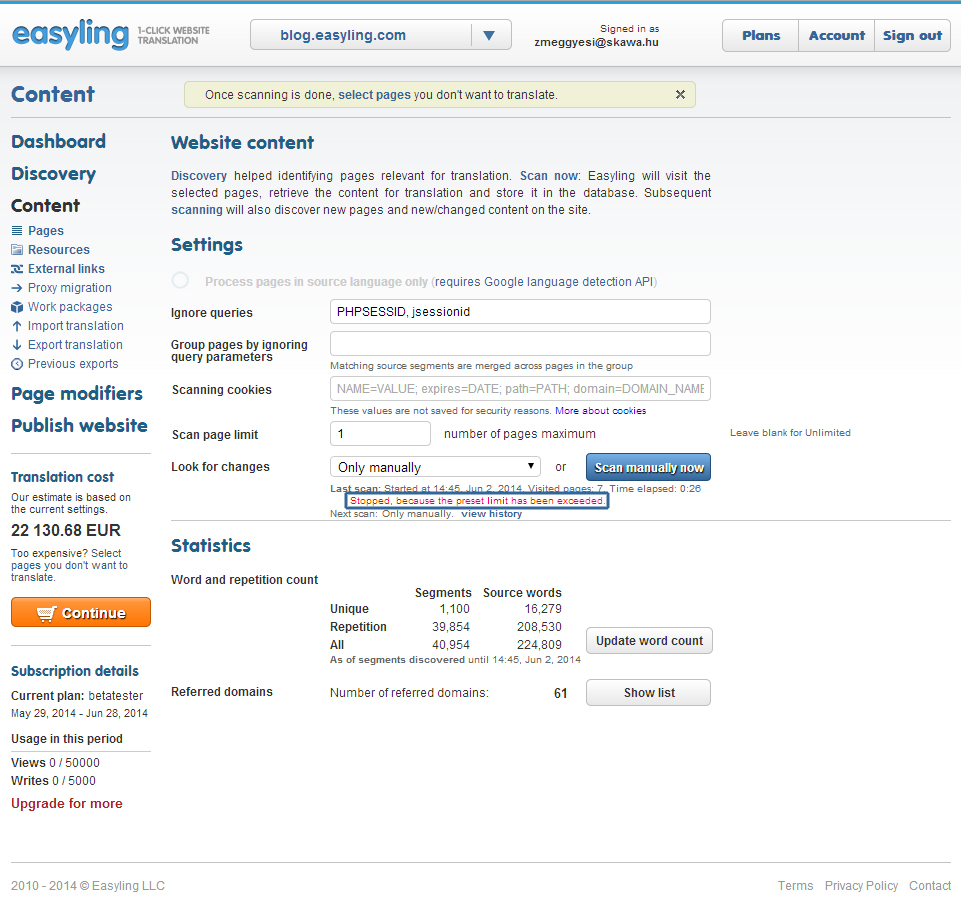 Lastly, the publishing interface has been given a radical facelift: since Google now allows domain mapping by the simple insertion of CNAME records, without having to register a Google Apps account, we went ahead, and took advantage of this, re-writing the entire interface. Now you don’t have to register an Apps account to publish your site, simply fill out the form (or confirm the pre-inserted values), and hit the Verify button. You’ll be given three CNAME values, which you need to insert into your DNS records, and your site will go live within 24 hours, maybe even sooner, depending on the speed of the propagation. 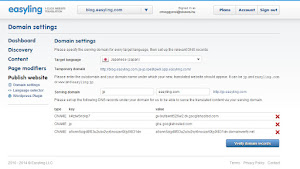