Between the heat and the vacations of July, it has been a fairly light month when it comes to new features. The features that were deployed, however, are just as powerful as always: for instance, project owners now have the ability to execute a regex-based search-and-replace operation over the entire project at the click of a button from the Workbench, or filter a Work Package to include only machine-translated segments (as opposed to including only human-translated ones, or both). Also, there have been a myriad of fixes under the hood, and advancements to speed up our operation. See the details after the jump!

Previously, the only way to replace a single word in all its occurrences was to export the project, use a CAT-tool or text editor to search for that single word and replace it, the re-import the XLIFF. Not any more.
The Workbench has been given the option to run a search on the entire dictionary for a given phrase or pattern in the target content (possibly by pre-filtering based on the source content), then replace that with something else in all it occurrences.

Since the operation can use regular expressions in all inputs (source filter, target search, and replacement), the possibilities are endless. For this very same reason, you must run a preview or a dry-run first, to verify your search expression – regular expressions are very powerful, and a single typo can wreak havoc in the blink of an eye.
Otherwise, since the task can potentially run for a long time (on projects with high word counts), it runs as a background task. Once started, you can close the Workbench, and you’ll receive an email notification of the results when the task completes. 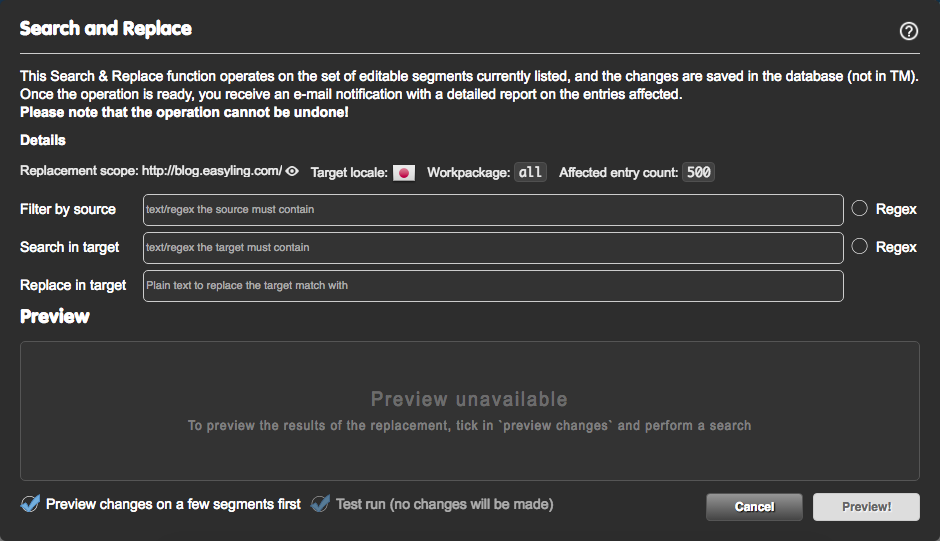 Use regular expressions to mass-edit content in your project. You can even use backreferences when substituting.

It’s a fairly common practice to machine-translate a project first, to get a demo version of the target language up-and-running, then send out the work in prioritised packets to the real translators. However, a problem presents itself with this workflow: how do you differentiate MT-sourced content from any human-sourced translations?

Fortunately, the Proxy stores this information for each segment and entry. Using the Work Package generation dialog, you can now select whether or not you want to include content sourced from MT-engines, humans, or both, in the package, and only the relevant entries will be exported. 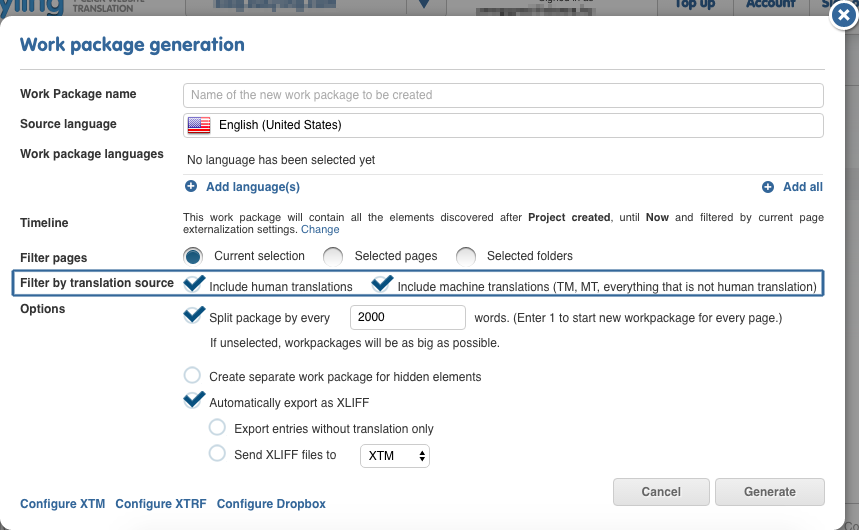 You can select the source of the translations before creating a Work Package. Select one or both to include content translated via that given method.

Additionally, there have been a myriad little fixes and enhancements on the backend, that underpin these features, as well as others that we’ll be rolling out in the coming months.
Also, the public beta program of the JavaScript-powered Client-Side Translation feature is still ongoing – if you would like to use it on your site, please contact support, and we’ll gladly help you set it up!