Another month has passed, and Easyling received several new capabilities, as well as an award during the LT-Innovate Summit in Brussels. The most important of these new capabilities is the new Translation Workbench, an upgrade of the existing List View, rewritten from the ground up along with the advanced Translation Memory (TMX) handling to support migration from other proxy solutions; but we also added the ability to define custom “ignore classes”, HTML classes which are exempted from being translated. See the full list after the jump! END_OF_DOCUMENT_TOKEN_TO_BE_REPLACED

May has passed with a lot of rain here in Budapest, and as the proverb goes, “Rains of May are worth gold”. With that in mind, we’re giving Easyling the Olympic Gold in new features. The platform is now able to process JavaScripts embedded into HTML, and some more of the rarely used features of CSS style sheets. Not just that, but we’re also giving users the opportunity to see how their scans terminate, and to upload customized segmentation rules (SRX files)! We’ve also reworked the website publishing interface completely, building on Google’s new initiative of allowing domain mapping without a Google Apps account.

And on a completely different note, we’re now en route to Localization World in Dublin. If any readers are also attending, hopefully, we’ll meet up! END_OF_DOCUMENT_TOKEN_TO_BE_REPLACED

When using a translation proxy, a frequent question is how new/updated content is handled, because of the time it takes for translators to process the new content and prepare their translations. Apart from using machine translation as a stop-gap measure, the most effective approach is using a staging domain to host your content only for linguists’ eyes before publishing it (and its localized version) for the world to see. END_OF_DOCUMENT_TOKEN_TO_BE_REPLACED

Translation proxy is a great and simple solution to provide translated version of any website. The content owner can focus on the original, and the Translation Agency takes care of the rest. However, sometimes it has to go further, beyond translation: custom HTML content must be added, depending on the target locale.
END_OF_DOCUMENT_TOKEN_TO_BE_REPLACED

META-Forum 2013, the international conference on powerful languages technologies for the multilingual information society starts on the 19th September. As one of the main topics of this years’s conference is Multilingual Web Services for Multilingual Europe, the META Exhibition also features Easyling, the website translation proxy.  END_OF_DOCUMENT_TOKEN_TO_BE_REPLACED

We are proud to announce our special partnership with unbounce, a tool to help you create ultimate landing pages. As a result of our collaboration, you can make multilingual landing pages with unbounce and Easyling ready for A/B testing on any market.

END_OF_DOCUMENT_TOKEN_TO_BE_REPLACED

Breakthrough at How to Web 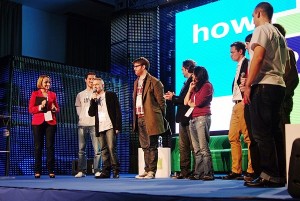 The first, but definitely not the last triumph of Easyling ticked off. As a proud father, I’m thrilled to announce that Easyling, our cloud-based website translation proxy solution won first prize at Start-up Challenge “How to Web 2011”, the biggest web conference of Central and Eastern Europe. Yesterday, we presented our latest business solution to 750 experts attending the finals of the competition. I have to confess: we are totally blown away by the victory. There were hundreds of submissions, and Easyling surpassed even the ten finalists that got an opportunity to present their ideas to an expert jury of How to Web.

I was happy to receive all the positive comments by all those guys from cutting edge ITC-companies, investors, analysts, specialists, industry leaders. Even without this victory, How to Web would have been a buzz, but now, we are having the time of our lives. And we are overexcited by what the future might hold: by winning this first prize, we have earned tickets and a startup booth at The Next Web conference in April 2012.

Well, with these figures at sight, what else can I say:
make way for Easyling.com!