On December 22, the public beta of the multicache feature has drawn to a close, and the final user interface was rolled out, giving users the power to add, rename, and assign separate caches to various proxy modes.

Easyling has had its caching capabilities for well over a year now. Initially, the proxy only cached the output of the translation process, in order to speed up serving the translated pages if the source remained unchanged – this was called the Binary Cache. Later on, this was expanded with the option to serve the Binary Cache even if the source content was changed – we called this the Keep Cache. Finally, the Source Cache was added not long after, enabling the project owners to store the remote server responses, effectively freezing the site in the state it was at the time of the crawl. By using a careful combination of the three caches and adjusting content ingestion cycles to content update cycles, it became possible to heavily limit or even eliminate bleedthrough entirely (though even if the source cache was on, non-cached content could still be accessed!).

Initially, the caches were single-version entities, with the same cache being overwritten as new content came in. The caches could be cleared, but not restored, opening up the translated site to bleedthrough. Additionally, if the content ingestion became desynchronized from the content update, word counts were skewed and possibly the wrong content was ingested for translation.

By enabling the users to create multiple caches both for source and target, it became easier to retain one cache for freezing the site in its last fully-translated state, while another holds content from the latest round of ingestion, currently being translated; while the separate target cache entities enable you keep the complete translations to be served, regardless of the changes being done in translation until the client signs off on them. Additionally, it is now possible to assign different cache entities to different proxy modes – this enables you to start work (including ICR!) on the newly-ingested content, while keeping the live serving site available without changes.

The old Page Cache dialog has been scrapped in the last update, and replaced by a completely different interface, expanded to fit the requirements of the enhanced page caching feature. Similarly, the Scan limit dialog has been given a dropdown so that you can select which cache the data written into. 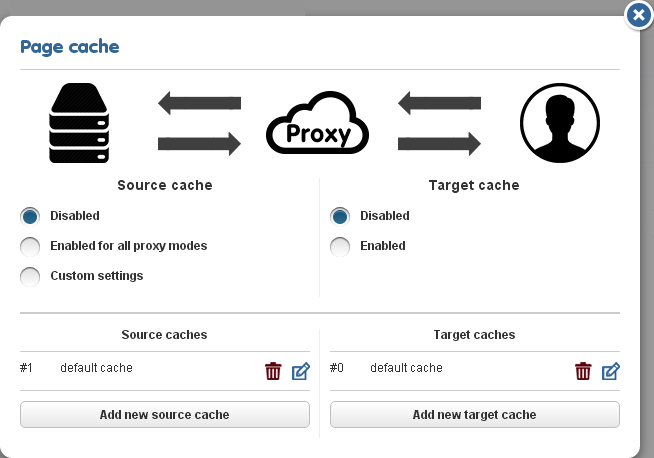 By default, all caches will be off, with only the defaults existing.

In order to take advantage of the Translation Proxy caches, you’ll need to activate at least one of the options. 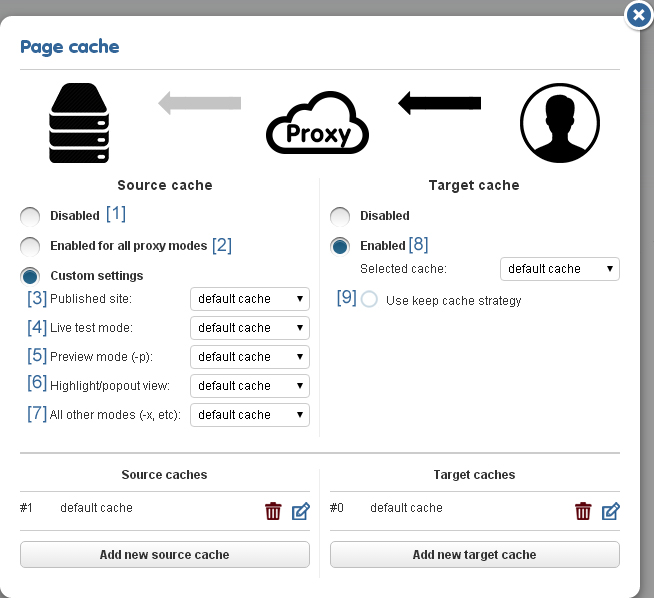 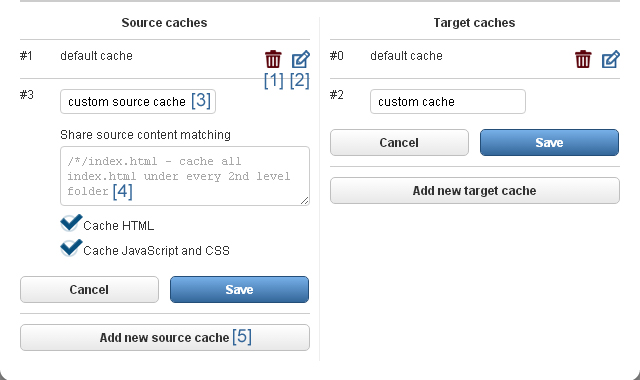 #1: Freezing the site before translation commences

In this example, the client has declined to use a staging server, as well as declining to halt content updates for the duration of the initial translation. They do, however, insist that bleedthrough must not occur at any point in the translation process. This results in a continuously changing source that makes it nearly impossible to achieve 100% translation.

In this case, the solution is to enable the Source cache, and populate it with a Scan before the first round of translation commences. This creates what is effectively a static snapshot of the site, which remains the same regardless of the updates the client makes in the meantime, providing a stable environment for the translation and review processes.

By using a Source cache to serve the translated sites, they are decoupled from the original, and content updates there will not be reflected in the translations

However, source content will accumulate in the meantime, and once the cache is purged, bleedthrough will occur! To counter this, the second scenario can be enacted.

For this example, the client has declined to use a staging server to allow you to ingest the content ahead of publishing for translation. They did, however, agree to notify you once new content is published, and have acknowledged that this will cause the translated sites to lag behind the original until the translations (and possibly reviews) are completed.
Alternatively, coupling into the previous scenario, the initial translations are in place, but the source site has moved ahead in the meantime, with the translated site being served by the initial Source cache.

Once the initial translations are completed, the caches are set up according to the image below: 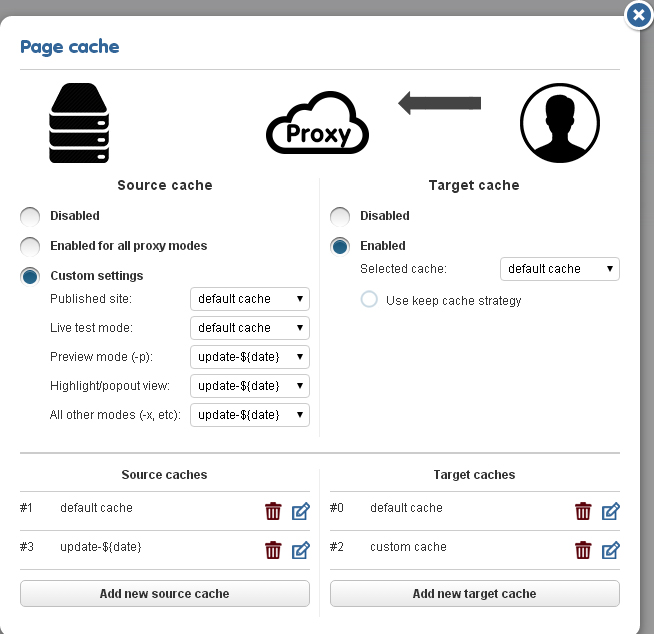 By driving the published site from a separate cache entity, you gain the ability to decouple the content ingestion cycle from the translation and update cycles

From this point on, the published site will not reflect any updates until the assigned entity is refreshed. By specifying the update cache in the Scan Limit dialog, you write the server responses into the newly created cache, which will drive the Preview and Highlight modes, allowing you to conduct the translations and ICR using the new content. Once the client signs off on the translations, you simply switch the Source cache entities being used (and purge the Target cache, if in use). 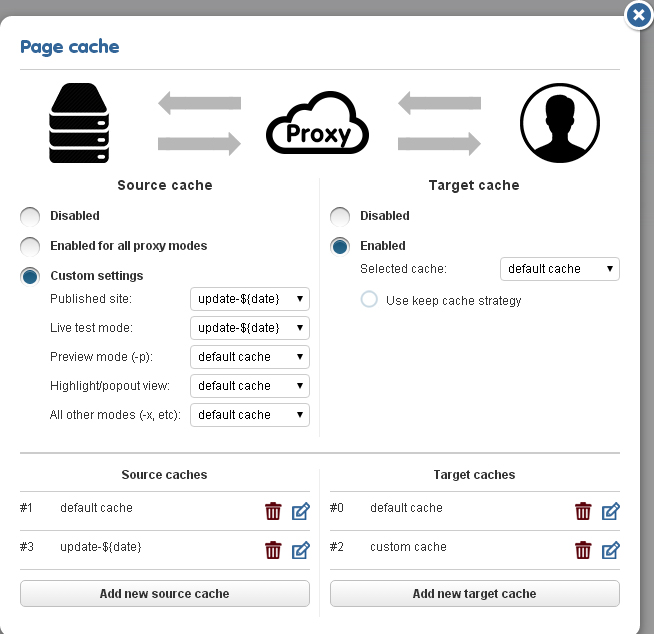 Once translations and reviews are completed, simply re-assign the cache entities to promote the new content to the translated “Production”

At this point, the previously-live cache entity is freed up for purging and re-building in the next update cycle. Thus, at the next crawl, the default would be selected to receive the updates, leaving the other entity untouched.

By managing which entity is being used to serve the published site and which one is being written to, it becomes possible to replicate the behavior of the staging server, albeit at the cost of increased attention to detail.

Any questions that arise should be directed to [email protected] That way, our team can give you a tailored response and assist with your projects.