As we move into February, we’re picking up pace as we add new features and powers to the Translation Proxy. Among these new features is the paged dictionary cache that has the potential to speed up page serving as well as crawling in certain circumstances (more on that in the details), the full rollout of our new translation pipeline, integration with MemoQWeb, and a brand new Work Package Generation UI. See the full details after the jump!

Work Package generation has been around for a long time in Easyling, and the UI has been fairly stable. However, recently, we have added a slew of new feature to this subsystem, and the time has come to roll them out to the UI as well.

The new UI follows a tabbed structure that separates the general settings from the source and target specific settings. All of the filters configured on the UI will be taken into account when creating the work package, meaning only entries that match both the source filter and the target filter will be incorporated and exported. 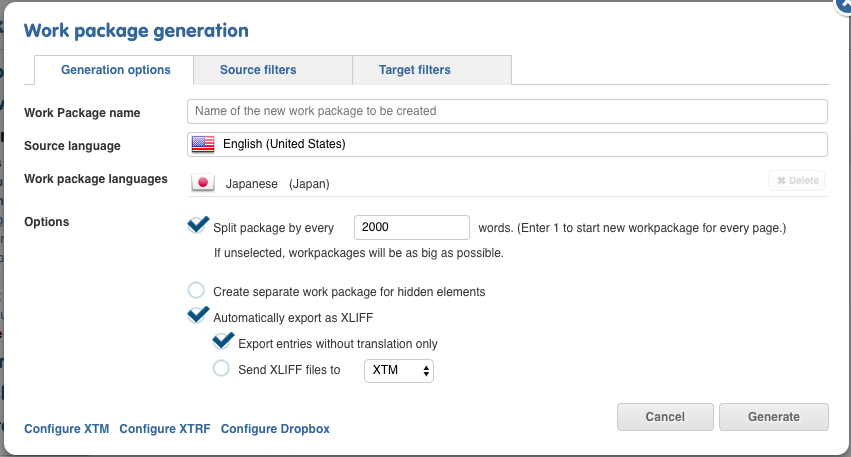 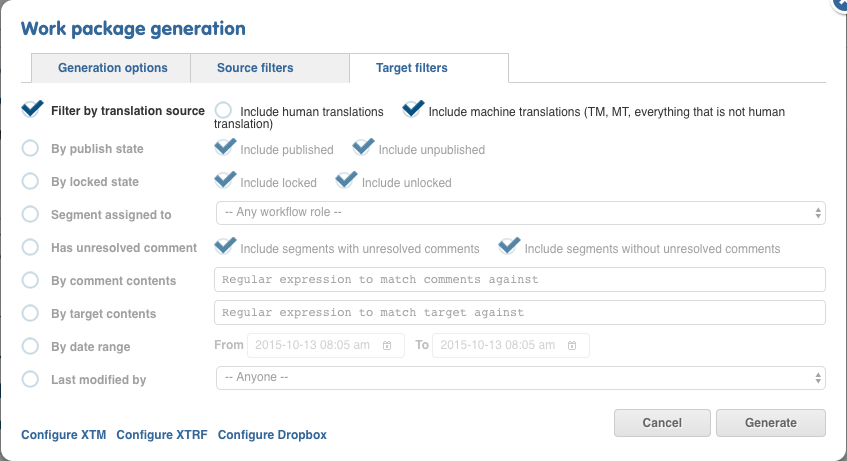 …and were not translated by a human (that is, they were either machine-translated or came from a TM-application).

One of the bigger features of the month was the creation of the paged dictionary cache. This feature is not rolled out fully yet, it requires our support to enable on projects, but it promises to speed up the serving of pages and crawls considerably.

To give you the details, Easyling does not delete content from its dictionary, even if it vanishes from the page, on the rationale that it may appear again at any time. This results in a dictionary by page that can only grow, and at page serving, the system will need to load it all into memory to grab the applicable translations, before it can cache the results to use again next time. Or so it used to be.

With the activation of the paged cache, the system begins to split the dictionary into pages after a certain size is reached, and only loads the most recent cache. This reduces lookup times to be a function of the content that appears on the page at that time, rather than content that has appeared at any time. While we have been fast enough that this barely makes a difference during page serving, it can have a greater impact during crawls, where in some cases, a reduction of 50% can be observed!

The feature is not yet fully public, requiring our support’s involvement, but in the future, it will be rolled out to be the default behaviour.

Another feature of the month was the integration with MemoQ Web. Found under the Integrations menu, once enabled, Easyling will be able to connect to MemoQ, and show you a live preview of the page being edited there.

This month, the newly-developed translation pipeline was made the default for new projects. Any project created after February 15 will enjoy increased translation speed, as well as a more stable and more adaptable translation process. Of course, projects created before the cutoff date can have the new pipeline enabled as well, upon request to our support.