Heat affects computers rather badly. Which is why we’re happy we have our AC in the office: it helps keep our chips (and developers) cool, so we can keep rolling out feature after feature for your enjoyment. This month was about a number of smaller features and fixes: the ability to pay in USD via credit card, Concordance Search on the Workbench, along with the ability to Mass-Exclude pages, the activation of the Subdirectory Publishing, a few relatively minor tweaks, such as the ability to translate the news_keywords meta-tags and automatically include both HTTP and HTTPS versions of pages when generating work packages. See every detail after the jump!

Easyling can already mass-exclude pages using our Rules Editor – provided there exists a common path prefix among them. But what if the many pages you need to exclude are scattered among many different prefixes? As long as you can prepare a list of exact URLs to exclude (be that via filtering an Excel export of the project pages list, processing another list via regular expressions, or any other method), and copy-paste them into the Mass-Exclusion dialog, the server will exclude them all for you as if you clicked the Exclude button manually. Of course, it’s just as easy to “un-exclude” them later on… 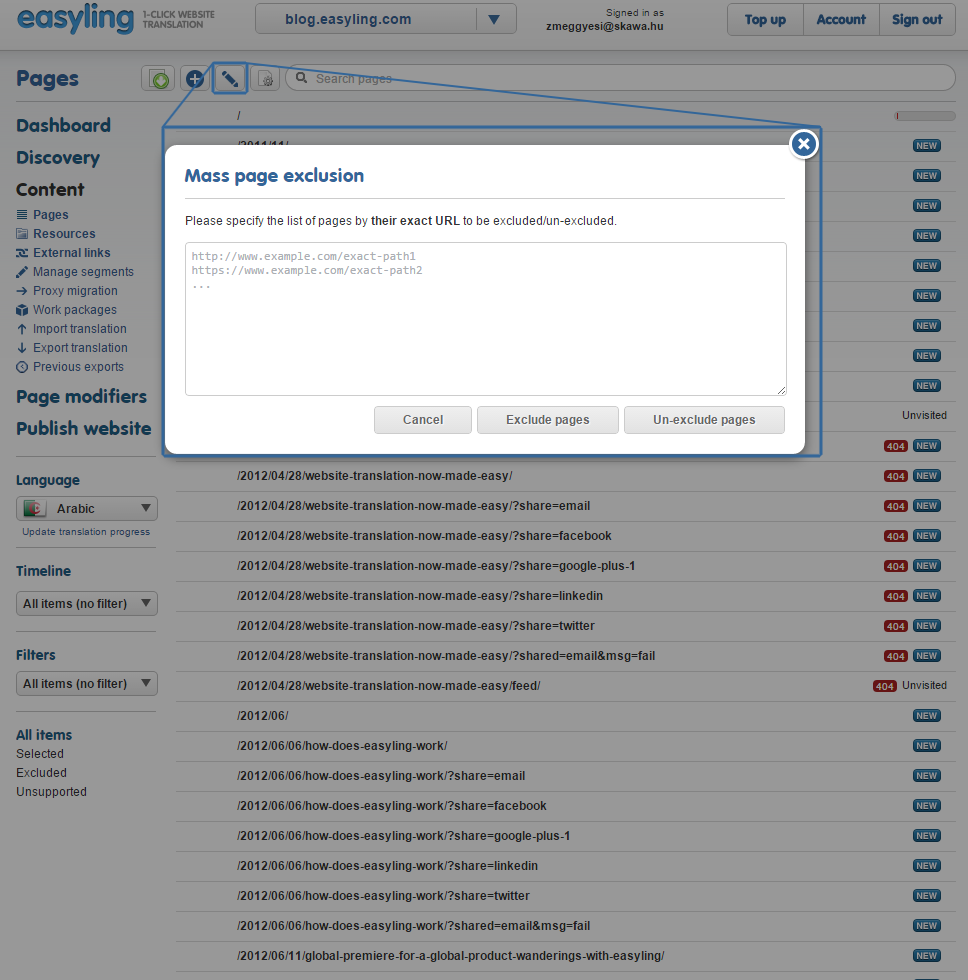 You can exclude masses of pages based on their exact URLs – or “un-exclude” them as needed.

Easyling was also given the ability to publish projects not only on subdomains, but also into subdirectories (for example, http://example.com/jp/content instead of http://jp.example.com). The necessary options can be configured on the Publish Website screen, but be aware that such subdirectory publishing also requires a properly configured nginx reverse-proxy in front of your web server (example configuration can be found on the Publish Website screen, though you may need to tweak it to integrate it into your installation). 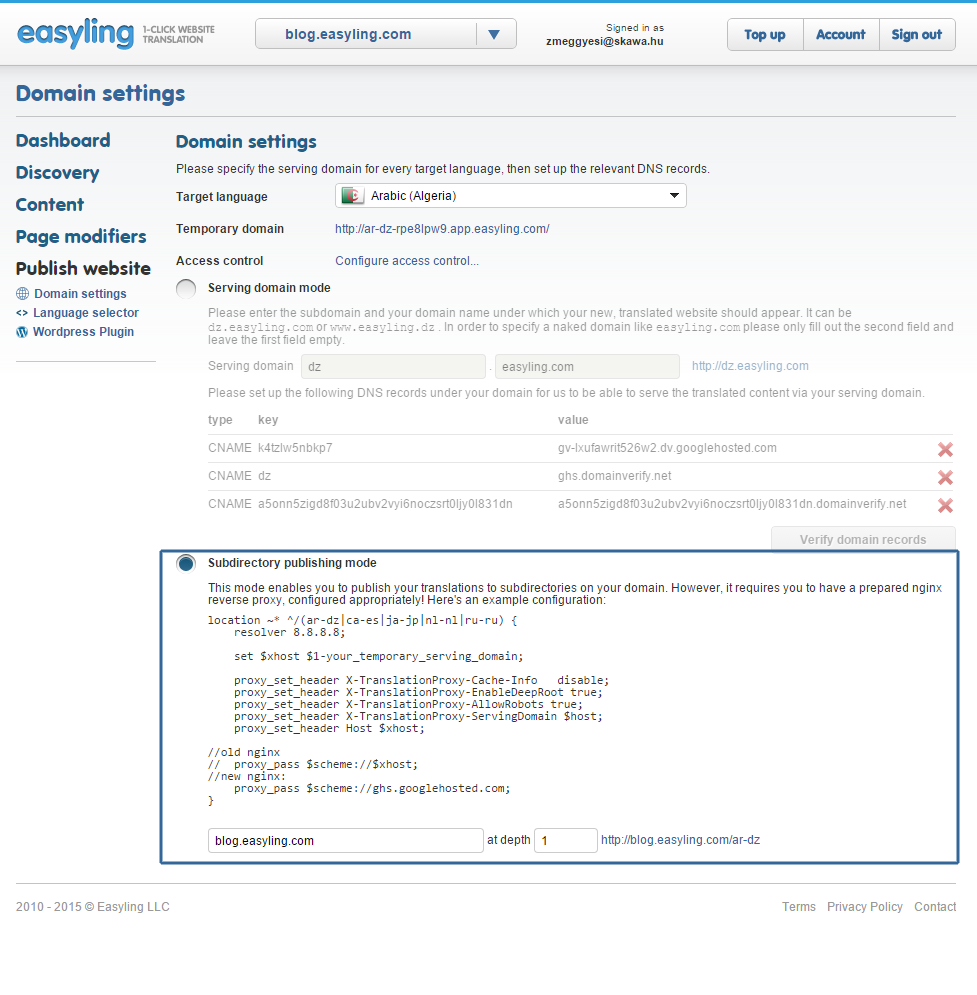 Easyling can also publish into subdirectories now, not just onto subdomains. However, this requires a properly configured nginx reverse-proxy in front of your webserver (see the UI for an example configuration entry).

Lastly, a few relatively minor tweaks: Easyling now extracts content from meta-tags with the name news_keywords, for even better SEO results; also, when generating a new Work Package, you can now instruct Easyling to include both HTTP and HTTPS versions of the pages you added, so that no content is missed at all.

Finally, you may have noticed that our blog became just a little bit more active, and strange posts started appearing every now and then, titled “Easyling Changelog” and a version number. These posts are generated by our AUtomated Release Assistant, or AURA, and list all the fixes and features in that given version. If you wish to stay on top of every single new feature, keep an eye out for these posts (staging area here): though compact, they give just-in-time notice of every new feature we put out, even before the monthly release notes hit the blog, which we keep compiling for you! 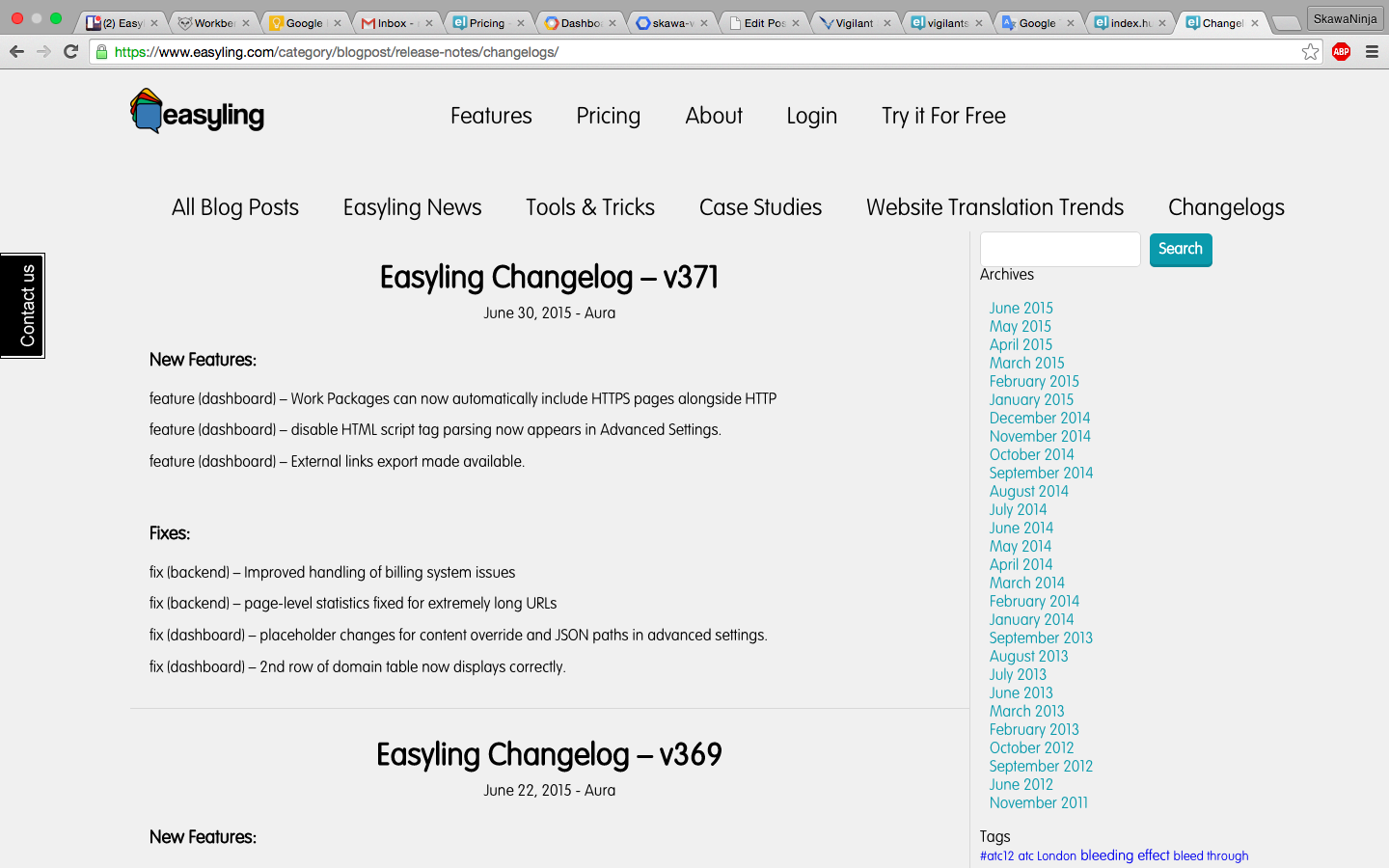 Every public release carries with it a changelog: a concise listing of the features and fixes particular to that given version